What Does the PCC Actually Bring? 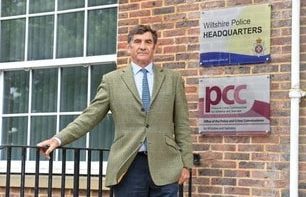 What Does the PCC Actually Bring?

As a Wiltshire resident I am concerned to learn that our county constabulary has been placed into “special measures” by HMICFRS, a body I greatly respect.  I was interested to watch as Wiltshire’s Chief Constable, Kier Pritchard, tried to explain his force’s rapid descent from a previous grading of Good in 2019.  I have worked in the policing and emergency services sector for over 20 years, so I have first hand knowledge of the immense challenges faced by Chief Officers around the country.  I have met Kier and believe him to be a hard working, dedicated, and decent career cop, who takes immense pride in his public role, so I felt for him.  But wait a minute, where was his “boss”, the Police & Crime Commissioner (PCC), Philip Wilkinson?  Nowhere to be seen.

Mr Wilkinson was, of course, delayed in taking up the appointment due to the flawed PCC Election that saw the initial “winner”, Jonathan Seed, withdraw, with a second election held at great cost to the tax payer.  Since his appointment, Wilkinson has courted controversy in the form of some rather ill-construed comments about the LGBTQ+ community, and been seen on TV joining cops on an operational raid (?) in Swindon.  But what has he brought to the role, in terms of tangible benefit to either the public or the force that he is supposed to oversee.  Let’s be clear, his role is yet another cost borne by an already overtaxed population, so we have a right to ask the question.

I note that Mr Wilkinson has been quoted as saying he has agreed a back-to-basics reset with the CC, and that fortunately, most of the Inspectorate’s points were “already under his microscope”; quite remarkable given his lack of policing experience.  My very genuine concern on PCCs is that the role appears to attract a lot of low level “local politicians” and senior ex-Army Officers who have little or no working knowledge of policing; it could be viewed as one of the jobs for the boys category and that’s extremely worrying.  I know and understand that CCs are required to accept the role and position of the PCC as their superior, but I have also witnessed first hand just how incredibly difficult it can make the job of leadership of a Police Force.  Prior to PCCs, the CC had total and exclusive right to command and lead his/her force in line with their career experience.  As a consequence, I am fairly sceptical of the benefits delivered by the majority of PCCs, or their governing body, the APCC.

So, to return to the point at hand; Mr Wilkinson is responsible for creation and production of the Police & Crime Plan (PCP) for Wiltshire.  Why wasn’t he present to answer questions posed by the media on the Force’s poor performance.  I assume he is taking the salary, but in my view that comes as part of a package, which includes taking the criticism.  From a leadership perspective, he should have provided top-cover for his CC, he was nowhere to be seen.  As an ex-serviceman, I would not have liked to serve with a Commanding Officer that hung me out to dry.